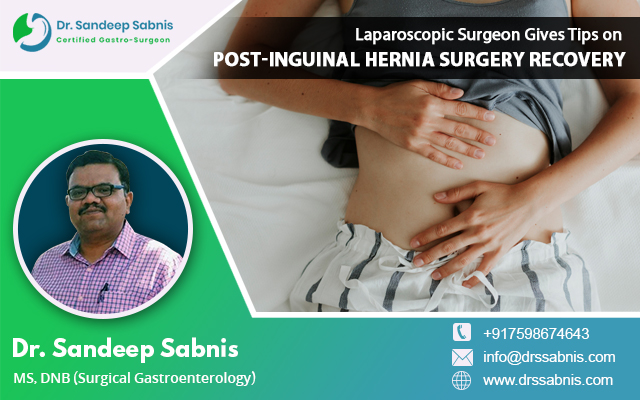 An inguinal hernia, a protrusion through a weak point in the patient’s groin muscles, causes pain and an unsightly bulge in the soft tissues of the abdominal muscles.

Inguinal hernias can become larger and cause consistent pain or complications, including incarcerations that get stuck or strangulated. Most hernias are repaired through surgery, which is performed laparoscopically.

What to Expect After Laparoscopic Inguinal Hernia Surgery

You may be released from the hospital after being able to urinate and consume liquids without vomiting or nausea, and after being able to walk without feeling dizzy. On average, a patient is discharged three to six hours after surgery (some slower while others are quicker).

Your hernia surgeon would recommend no driving for the initial 2-4 days and might give you a prescription for pain medications. It might cause a few side effects, which includes nausea and constipation. Patients have said that they are generally prescribed 5 tablets of pain medication over the initial 2 days after surgery.

The recovery of patients after a laparoscopic inguinal hernia surgery is associated with mild to moderate groin discomfort and incisional pain. It may persist for about 2 – 14 days, but goes away by the third or fourth week after surgery, says the laparoscopic hernia surgery specialist in Nashik. By the third-to-sixth month post-operative visit, approximately 0.1% of the patients are symptomatic. The groin discomfort experienced in the first week may be related to the hernia dissection, the gas used during operation, or rarely the mesh material.

The three incisions will be covered with a dressing. Specific instructions regarding wound care are provided upon discharge. The outer bandage is usually removed after 2 days, while the white tape and skin glue after 7 to 10 days.

Normal diet, as suggested by the hernia surgeon, is resumed to lessen surgical stress.

Majority of Dr. Sabnis’ patients said that they have returned to work without any restrictions after three to seven days.